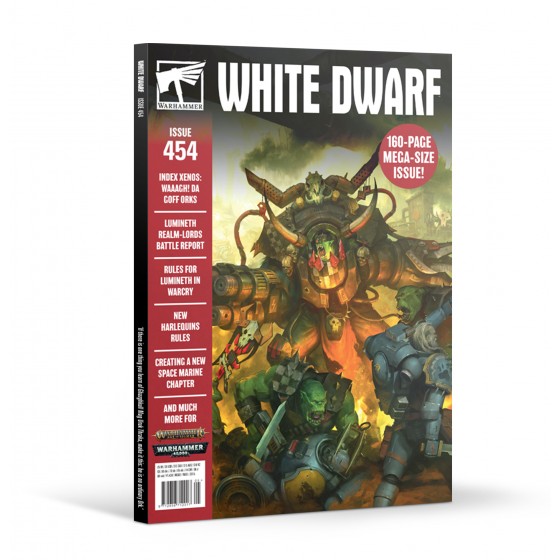 Here’s what you can look forward to in May's issue:Contact!Letters, painting advice and loads of beautifully painted miniatures in this month’s Contact! Also, containers.Worlds of WarhammerPhil discusses how our favourite miniature warriors go to battle and the many stories we have to tell about them. Unless you’re Guardsman 88 – we don't like Guardsman 88.Inside the StudioCheck out all the wonderful hobbying the studio team has been up to over the last few weeks.WARHAMMER 40,000Index Xenos: Goff OrksWaaagh! Read all about the biggest and ’ardest Orks around – da Goffs! Includes background on large conflicts involving the Goffs, including Armageddon, Ryza and others. Features 3 new datasheets for open and narrative play only, including one with a more musikal focus...Paint SplatterStage-by-stage guides for painting Goff Orks, covering Classic and Contrast styles for all levels of hobbyist.Kitbashin’ & Kollectin’We show how to konvert Nobz and Big Mekz. There’s also a gallery of Goff Orks for inspiration. We hope you like black.Echoes from the WarpGames developer Elliot Hamer joins us to discuss how stories and background drive the creation of rules.Tradition’s Last BreathCould this be the end for the Angels of Death, or is it just the beginning? A short story by Aaron Dembski-Bowden.A New and Deadly DancePlease welcome to the stage, exciting new rules for Aeldari Harlequins! Includes 9 Stratagems, 6 Enigmas of the Black Library, as well as variant rules for Pivotal Roles for the Troupe Master, Death Jester, Solitaire and Shadowseer.Galactic War Zones – Imperial Hive WorldsEver wanted to build and paint an army from a hive world? Here’s our guide! Includes a painting spotlight from James Acons on painting 'The Rust Pit'.History Of A ChapterPart two of the White Dwarf team explaining how they went about creating their own Space Marine Chapter – the Tome Keepers.Faith & Fire – Part IVThe fourth part in this classic Sisters of Battle novel by James Swallow.WARHAMMER AGE OF SIGMARRules Of EngagementJervis takes a scenic jaunt through the evolution of Warhammer terrain. Do you remember polystyrene hills?VaddenheimPart three of the Hallost campaign. This instalment includes new campaign rules, a map and four new battleplans.Battle Report – The Lumineth ResurgentLed by Teclis himself, the Lumineth Realm-lords find themselves in a desperate battle against the Slaves to Darkness.WARCRYA Tale of Four WarbandsPart two of the White Dwarf team's jaunt into Warcry, as Lyle, Jonathan, Matt and Dan continue their campaigns. Some are more successful than others …A Light In The DarknessRules for using the Lumineth Realm-lords in Warcry, including a campaign. Also includes 11 profiles and their points.WARHAMMER 40,000: KILL TEAMThe Witch-hunting EliteIntroducing new rules for the most experienced and deadly witch-hunting kill team of all – the Sisters of Silence. Includes 4 Tactics, 3 Datasheets, points and more.WARHAMMER UNDERWORLDS

Glory PointsDave Sanders chats about Flex warbands and how to get the most out of them. Being flexible helps, apparently.Path to VictorySorry, we just couldn’t keep him away! Dave’s back again, this time with a ten-page Warhammer Underworlds tactics article. Includes a look at Ironsouls Condemnors and Lady Harrow's Mournflight.BLOOD BOWL

Defender Of The MarkMiddle-earth word-scribbler Jay Clare provides a tactics guide for Éomer, the Marshal of the Riddermark.