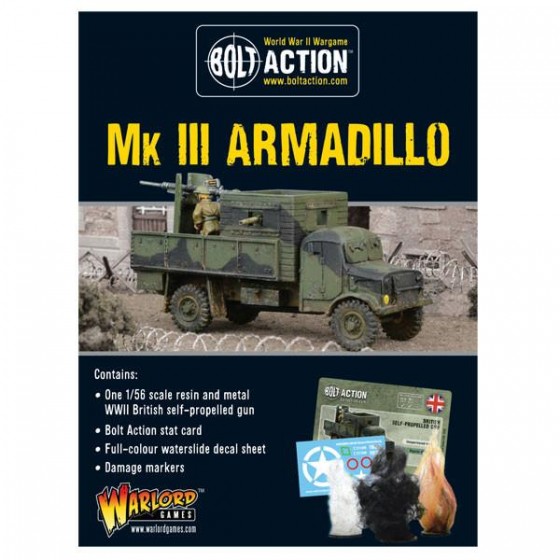 Armadillos were improvised armoured self-propelled guns based on any available lorry chassis for airfield defence. The ‘armour’ consisted of wood and/or steel plates lined with gravel. The Mark I and II were armed with two Lewis Guns mounted in an open-topped ‘fort’, plonked onto a flatbed lorry that itself lacked even an armoured cab.

A resin and metal Armadillo

An embrasure on each side allowed one Lewis Gun and one rifle to be fired into each side arc (the vehicle also contained a fifth gunner with another rifle who could fire over the top of the fort walls in any direction assuming he was feeling lucky or merely suicidal).

The Mk III incorporated a Coventry Ordnance Works, clip-fired 37mm aircraft cannon designed during World War I. It was located right behind the fighting compartment so the gunner could operate it while inside the fort. In 1942 some were equipped with plastic armour.