Warhammer 40000: Kill Team Into the Dark 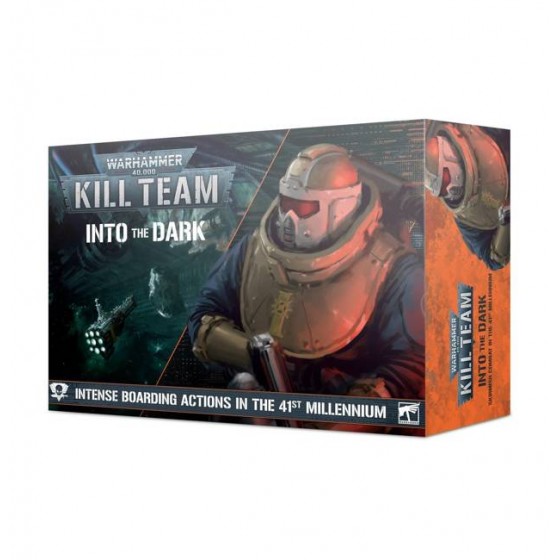 After thousands of years in the warp, the space hulk Gallowdark has emerged into realspace. This colossal, moon-sized derelict holds enormous wealth for those courageous enough to explore it – and terrifying dangers for those foolhardy enough to step inside. A mercenary Farstalker Kinband of the alien Kroot is first to seek the pick of the plunder, only to be cornered as elite Imperial Navy Breachers storm the hulk. Little do either team realise that their rivals are far from the only danger waiting within…The thrilling game of sci-fi skirmish battles enters a new season as operatives clash amongst the claustrophobic corridors of a massive drifting spacecraft, and Kill Team: Into the Dark is the perfect place to jump aboard. This incredible boxed set is packed with two complete kill teams – Imperial Navy Breachers armed for boarding, and a Farstalker Kinband of brutal Kroot – alongside a new gameboard and stunning terrain pieces representing the interior of the Gallowdark, plus all the rules and accessories you need to start playing straight away. It's a brilliant box to share with a friend – or grab two full kill teams of your own.In this box you'll find:1x 144-page softback Kill Team Core Rules book: Learn your way around Kill Team with this tome of clear, concise rules for matched play, open play, and narrative play games.1x 120-page softback Kill Team: Into the Dark book: Including rules for your kill teams, plus background material, artwork, missions, and linked campaigns aboard the Gallowdark space hulk.24x Citadel miniatures: Two full kill teams – Imperial Navy Breachers and Kroot Farstalker Kindband – each featuring a wide array of customisation and alternate assembly options. Extra detail parts allow for deep personalisation of your kill team, with many models able to be assembled as multiple different kinds of operative.54x pieces of Killzone: Gallowdark terrain and 6x Kill Team Barricades: This modular system of walls, doors, can be arranged in a huge variety of configurations to create different room and corridor layouts. Some elements even feature glueless assembly, allowing you to adjust their positioning in the game.3x Combat Gauges: Kill Team uses a simplified measurement system to create fast, dynamic games. These combat gauges feature the symbols used for Kill Team, and are perfect for slotting into narrow gaps between operatives when a regular tape measure would be too cumbersome.Additional Accessories: Get straight into the game with a double-sided game mat styled after the depths of the Gallowdark, a Kill Team token sheet containing 85 tokens, 10 six-sided dice, and two decks of Tactical Ops Cards.These miniatures are supplied unpainted and require assembly – we recommend using Citadel Plastic Glue and Citadel Colour paints.