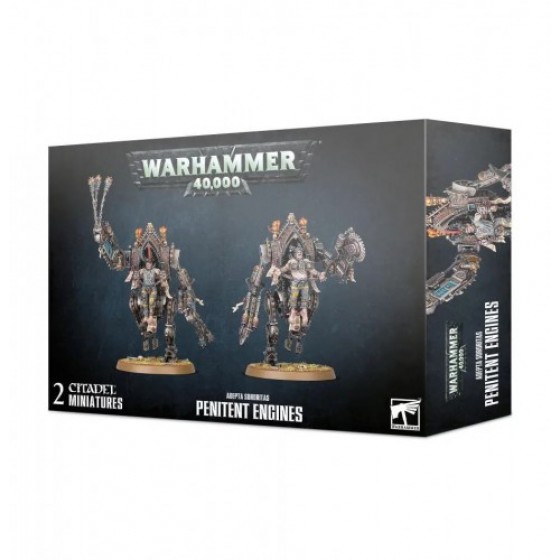 Piloted by sinners and heretics still able to seek redemption, Penitent Engines charge towards the foe heedless of danger, knowing that only through death can absolution be earned. The arms of the engine, mounted with enormous flamers, blaze a trail of fiery destruction as it thunders forwards. Upon reaching the enemy's battle lines, the pilot is pumped with chemical and synaptic signals that induce unfathomable guilt, forcing them into a rampage that leaves nothing but death and carnage in their wake. Some engines bear adamantine-toothed buzz-blades that are capable of cleaving through plated tank armour, while others mangle flesh and pulverise bone with lashing swings of their multi-headed flails.This multipart plastic kit builds two Penitent Engines. These frenzied mechanical walkers combine berserk toughness and speed with brutal close range weaponry, rampaging forwards to mangle the enemies of the Ecclesiarchy. Each Penitent Engine is equipped with two heavy flamers, and any combination of two melee weapons chosen from penitent buzz-saws or penitent flails. Alternatively, each miniature can be built as a Mortifier.The kit comprises 126 plastic components, and is supplied with 2x Citadel 50mm Round Bases. These miniatures are supplied unpainted and require assembly – we recommend using Citadel Plastic Glue and Citadel paints.